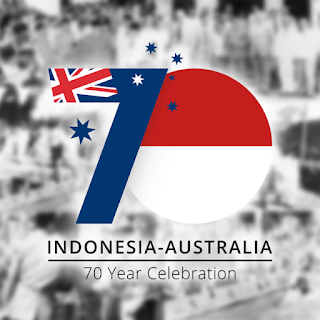 Flicking through my social media feed on the 17th of August, being the 70th Anniversary of Indonesian Independence, I felt a sense of joy seeing the outpouring of celebration on social media.  It brought a Cheshire Cat grin to my face as I sipped my green tea, smartphone in hand and scrolled.   Hashtags trending on Monday included #RI70, #70TahunBanggaIndonesiaku, #ID70, HUT RI and Dirgahayu RI.  Red and white filled my page, millions of people all over the world acknowledging Indonesia’s milestone anniversary, including many of my Australian friends, associates and affiliations.

I saw photos of a flag raising ceremony in Federation Square in Melbourne, many videos from Indonesian Consulates around the world “Dirgahayu Kementerian Luar Negeri RI”, enchanting images of Indonesia including Borobudur, beach sunsets, cities, islands, volcanoes, festivals, Indonesian people with big smiles, often with flags in hand.  One thing was clear, Indonesians are proud, and I was proud to be Australian witnessing all of the good wishes by Australians to Indonesia on this special day.  There was a random tweet, which I just have to mention that made me LOL in amongst the celebration - ‘OMG THERE IS A DURIAN EMOJI!’ And so there was.

Social media in Indonesia has come into focus in recent times with revelations that Indonesians are some of the largest users of social networks and mobile devices in the world.  It’s a fast, cheap and easy way to communicate with the general populous - a fact that hasn’t been lost on some diplomats and politicians.

The use of Facebook and Twitter as part of Joko Widodo’s presidential campaign proved to be popular among Indonesians.  As the business of running the country came to the forefront in Jokowi’s first few months in office we saw the number of posts taper off along with his popularity.   Now of course, the decline in Jokowi’s popularity was more likely to do with unfulfilled expectations in terms of the slow development of infrastructure projects, rising fuel costs and political tensions among other things and not due to the lack of social media postings, but one couldn’t help but notice the return of regular nationalistic, campaign-like postings to social media that began again in June and then shortly there after an apparent increase in popularity.

Former Indonesian president Susilo Bambang Yudhoyono recently took to Twitter to communicate his concern about the draft bill being introduced to the House of Representatives by the government about libel and defamation towards the presidency, and urged Jokowi not to over react.

UK Prime Minister David Cameron painted himself as a friendly, fun-loving guy on his recent visit to Jakarta venturing out into the street market, eating pisang goreng made by stall owner Ibu Djuna and then posing for a quick selfie with Ibu Djuna and Indonesian actress and singer Maudy Ayunda.  This selfie was then uploaded to Instagram, Twitter, shared, liked and commented on, picked up by media and ran in many commentary articles globally.  When you consider the old saying ‘a picture is worth a thousand words’ then what is the value of that thousand words shared millions of times around the world and in a national population who uses this medium as their regular source of information?

Has Australia cottoned-on yet?  The Australian Embassy in Jakarta has an active and positive social media presence; Facebook, Instagram (great pics!), and the ambassador Paul Grigson is often tweeting about his activities in Indonesia and retweeting cooperative and collaborative events between our countries.  Our foreign minister Julie Bishop, also a great user of social media using it to celebrate her team’s recent win at the local Australian Football League derby (we let you have that one Jules! Go Dockers!) and highlighted her recent talks with Indonesia’s foreign minister Retno Marsudi with photographs.

On Monday 17th of August, 2015 both the embassy, ambassador and our foreign minister posted congratulatory and celebratory notes and images to acknowledge the 70th anniversary of Indonesia’s Independence.

Whilst I am not proposing that social media is the answer to recovering our dwindling relations, as a tool in ‘people-to-people’ relations, changing perceptions (in both countries), and connecting with the greater populous a quick snap of both Indonesians and Australians immersed in each other’s cultures can go a long way, especially if they are our leaders!

In the collection of articles below you’ll find the lecture recording from our recent collaborated event here in Perth, a couple of short videos, and a collection of news articles from recent happenings in the Indo-Aus arena.

We'd also like to send a big congratulations to the recently announced  thirty delegates for the The Conference of the Australian and Indonesian Youth (CAUSINDY) to be held in Darwin later this year.  You can meet them here.

ASEAN Economic Community 2015 and The Potential of Indonesia - Ambassador's Dialogue with H.E. I Gede Ngurah Swajaya, Chairman of the Indonesian Economic Diplomacy Task Force and Indonesia's Ambassador to ASEAN.  Many thanks to the Perth USAsia for making available the lecture recording for the collaborated event with AIBC and Indonesia Institute.


ACICIS Great little video documenting the experience of students and teachers of Scotch College, Western Australia in their school tour with the Australian Consortium for 'In-Country' Indonesian Studies (ACICIS).

The Baduy Tribe in West Java trying to protect their culture and traditions from outside influence.

Lest We Forget Australia's Role In Indonesian Independence, by Johannes Nugroho (August 2015).

Getting Up Close and Personal with Indonesia, by Duncan Graham (August 2015) in New Mandela.

Australia Needs to Figure Out It's Own Place in Asia, by Endy Bayuni and Sabam Siagian (August 2015).

Australia-Indonesia: A Marriage of Inconvenience, by Ristian Suprianto (August 2015).

Look into Indonesia, not over it, Jokowi's First Year and Two-Track Diplomacy

Thanks for visiting and checking out the latest news.

Our news and updates will now also be popping up on Twitter and Facebook - 'Tweet, tweet!' We'd love you to follow us there too!  If there's something that you think we should know about you can use these platforms to get in touch with us also.

To highlight couple of events...

The Ambassadors' Dialogue with I Gede Ngurah Swajaya, Chairman of the Indonesian Economic Diplomacy Task Force on the 29th of July in partnership with the Perth USAsia Centre and the AIBC WA was a great success.  Great to see so many of our members there!  We'll be posting a recording of the lecture soon for those of you who were unable to make it. Thanks to the Perth USAsia Centre for making this available.  Stay tuned!

The AIBC WA is hosting a breakfast with Pak Amien Sunaryadi, Chairman of the Special Task Force for Upstream Oil and Gas Business Activities Indonesia on 20th of August.  All are welcome to attend.  Members of the Indonesia Institute have been offered the same discount rate as AIBC members for this event, if you are interested in attending this event you can register here.

With the Australia-Indonesia relationship arguably 'returning to normal' and we start to look at Jokowi's first year as Indonesia's president, many commentators and diplomats are very frank about the state of affairs in the political arena and call on business-to-business and people-to-people to establish and maintain good relationships with our neighbours.

For those relationships we need to look no further than our human spirit and the commonalities between Australians and Indonesians.

We hope that you enjoy our collection of articles below.

Look into Indonesia, not over it, by Matt Linnegar (July 2015) Discussing the human impact of decisions made around the cattle trade and the welcoming experience given by Indonesians to leaders of the Australian Rural Leadership Program.

The Gold Farmers, by Nancy Lee Peluso (July 2015) Heart-capturing photo essay and write up about the perils and opportunity of small-scale illegal mining in West Kalimantan.

Injustice to Indonesia on the radar for Australian Lawyers Alliance, by Stephanie Garber (July 2015) “It's been our view that the Indonesian fisherman, who are hard-working peasant businessmen, have had their boats taken and destroyed when there wasn't any lawful reason to do it.”

Australia-Indonesia relationship is back to 'normal', meaning fragile as ever, by Colin Brown (August 2015)

Inept officials, database slow efforts to curb water crisis, by Syamsul Huda M. Suhari, Ganug Nugroho Adi and Suherdjoko (August 2015).  Government support not being received by farmers impacted by the prolonged dry season in Indonesia including in our sister-state of East Java.

The need for 'track two' diplomacy in Australia-Indonesia relations, by Kyle Springer (July 2015)

On behalf of our President, Mr Ross B. Taylor AM, we welcome you to our blog that covers almost anything to do with Indonesia-Australia relations. This blog is sponsored by the Indonesia Institute (Inc) with the support of the team at Curtin University in Western Australia.

We encourage you to send us your articles and views on whatever subject you feel is relevant to Indonesia 'today', and in particular, within Indonesian and Australian societies; including economic, social or political systems.

We also encourage you to add your comments and ideas about the Indonesia-Australia relationship.

We hope you enjoy reading our blog and if you would like to send us an article for consideration for publication or become a regular follower simply email us at:

We will add you to our mailing list so we can all contribute to building closer ties between neighbours!